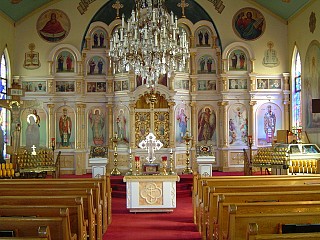 The Orthodox Church is the living manifestation of our Lord Jesus Christ's presence in the history of  mankind. We humbly, yet confidently profess to be the Church of Christ, founded on the apostolic witness to our Lord, born on the Day of Pentecost, and for 2,000 years making known to men, women, and children the path to salvation through repentance and faith in Christ.

Probably the most striking characteristic of Orthodoxy is our rich liturgical life and faithfulness to the apostolic tradition. We believe as Orthodox Christians that our Church has preserved the tradition and continuity of the ancient Church in its complete fullness.

Today the Orthodox Church numbers approximately 300 million Christians who follow the faith and practices that were defined by the first seven ecumenical councils. The word orthodox ("right belief and right glory") has traditionally been used, in the Greek-speaking Christian world, to designate communities, or individuals, who preserved the true faith (as defined by those councils), as opposed to those who were declared heretical. The official designation of the church in its liturgical and canonical texts is "the Orthodox Catholic Church" (greek catholicos = universal).